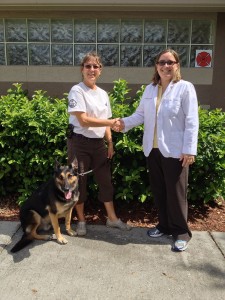 K9 Chason came to the Sarasota County Sheriff’s Office and Handler Deputy Chris Perz in March of2008 from Budapest, Hungary. He was a replacement dog for my first K9 who had to be put down due to cancer at the young age of eight years old. At the time he arrived, Chason was only 10 months old. Shortly thereafter he began training to become a dual certified K9. K9 Chason was certified later that year and began working throughout Sarasota County. He was very good at all of his jobs however; he always excelled the most when tracking down a subject. In May of 2009 K9 Chason was involved in an incident that was considered for an award by FUR as the entire vehicle pursuit, crash and flee on foot apprehension of a suspect was captured on infrared video from our agency’s helicopter. The video was also used as a training tool for our entire agency that year. Sadly, K9 Chason was injured later in 2009 during training at work and severally tore his iliopsoas muscles throughout his body. He was treated extensively by a veterinary neurosurgeon for his injuries and eventually returned to work. This only lasted one week and he re-injured himself simply by jumping into my patrol vehicle. The final recommendation from the neurologist was that he should never jump again, which wasn’t a good outlook for a police dog. He was medically retired to me from police work and still resides with my family in Nokomis, Florida.

K9 Chason was not done yet though. With massive amounts of energy and seemingly injury free many months later, he has begun a second career as a search and rescue tracking dog, with Sarasota K9 Search and Rescue. My mother, Cindy O’Neill, has taken control as his handler and he is now a certified tracking dog for this group. He has worked numerous cases since, helping many of the law enforcement agencies in our area with missing children and Alzheimer’s patients. He has excelled in this arena and has purpose in life once again. He has always been a work dog in his heart and he anxiously sits by the door most days just waiting for the next call.

Chason has also expanded his search and rescue knowledge and is now certified in human remains detection. He passed his first official test on June 4, 2013. He completed searching three large search areas and successfully located one buried and one above ground source in a rapid time of four minutes. His FDLE evaluator was quite impressed. He loves his new job in search and rescue and will continue helping those in need, all of his working life.